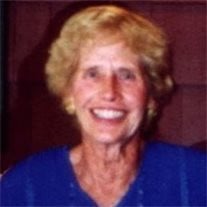 December 07, 1935 - September 17, 2013 Anne Estabrook Hoffmann, age 77, of Holland, MI and Peachtree City, GA, passed away Tuesday, September 17, 2013 at the Hospice House of Holland. Anne was born December 7, 1935 and raised in Indianapolis, IN where she graduated from Shortridge High School in 1954. In 1958, she graduated from the University of Colorado with a degree in English Literature. She married Charles Hoffmann in 1959 and moved to Austin, TX while he attended the University of Texas Law School. She was a member of the Second Presbyterian Church in Indianapolis, Kappa Alpha Theta sorority, and tennis clubs in Macatawa, MI and Peachtree City. Anne was known for her athleticism and competitive attitude. She was an excellent tennis player who played and won many matches over the years. She even competed in the Senior Olympics. Her favorite place was on the tennis court with her husband, daughters, grandchildren, and friends. She also enjoyed playing board games and cards with her family. Anne was preceded in death by her parents, Neil and Lida Estabrook; brother, Pete Estabrook; and grandson, Thomas Hay. She is survived by her husband of 54 years, Charles; daughters, Karen (Ken) Hay of Maineville, OH, Gretchen ( Toby) Stock of Athens, OH, and Alison (John) Hartline of Singapore; grandchildren, Christy, Michael, and Alexander Stock; Daniel, Elizabeth, and Andrew Hay; Jack, Charlotte, and Bink Hartline; twin sister Frances (Joe) Mayo of Florida; and numerous nieces and nephews. In keeping with her wishes, cremation has taken place and a memorial service celebrating her life will be scheduled next summer. Memorial contributions may be made to the University of Colorado and the American Lung Association. Arrangements are by Langeland-Sterenberg Funeral Home, 315 E 16th St., Holland, MI, www.langelandsterenberg.com.

The family of Anne Hoffmann created this Life Tributes page to make it easy to share your memories.

Send flowers to the Hoffmann family.