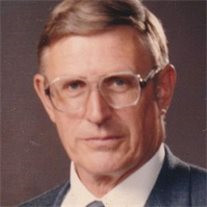 Cornelius Charles Pastoor, age 88, of Jenison, MI, entered the joy of his Lord on January 10, 2022. We can say for him: Arise, shine for your Light has come and the Glory of the Lord is risen upon you&#8212;Isaiah 60:1. Neal will be deeply... View Obituary & Service Information

The family of Cornelius Pastoor created this Life Tributes page to make it easy to share your memories.

Send flowers to the Pastoor family.