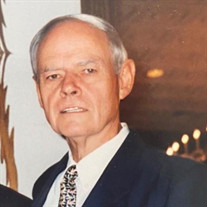 David Lee Van Duyn, 85, of Zeeland, formerly of South Holland, Illinois, died unexpectedly on February 17, 2022, in Harlingen, Texas. David was born on December 24, 1936, in Austinville, Iowa, to Cornelius and Grace (Limburg) Van Duyn. He graduated from Illiana Christian High School and Calvin College. After graduation he enlisted in the Navy and was commissioned as an officer, completing his training as an aircraft navigator. He married Jennie De Vries on February 28, 1959, and was a devoted husband for 62 years. They began their life in Hawaii where they lived for three years. He proudly served in the U. S. Navy for four years of active duty during the Vietnam War (1958–1962). He served an additional 16 years in the Naval Reserves, retiring as Commander Van Duyn. Dave and Jennie raised their family in South Holland, Ill. He worked in I.T. at Allis-Chalmers for most of his career, but also GADS, R.R. Donnelley, Palos Community Hospital, and did I.T. consulting before retirement. Dave loved the Lord, going to church, and music—listening, singing, or playing. He was a man of varied interests, including classical and choral music, cars, White Sox baseball, politics, and any activities his grandsons enjoyed. Dave was always ahead of the curve with new technology, and could be counted on to fix everything from computers to car motors. He was equally as comfortable chairing a church committee as he was tinkering underneath his Mopar or tuning up an ATV for his grandsons to ride. Dave’s sharp wit and dry sense of humor showed him to be a keen observer of life. He was proud of his service in the Navy and shared great stories and recipes from his friends and travels around the world. Later in life Dave and Jennie split time between Texas and Michigan, chasing the heat and enjoying their favorite Mexican cuisine in the Rio Grande Valley. He was a loving husband, a caring father, and a loyal friend to those all over the world who were fortunate enough to know him. Our hearts are heavy but we rejoice in his homecoming in heaven. He is survived by his wife of 62 years, Jennie, three children: Mary (Jerry) Zandstra of Big Rapids, Mich., Jim (Gretchen) Van Duyn of Wheaton, Ill., Rachel Vandenbroek of Grand Rapids, Mich.; 10 grandsons: James (Laura) Zandstra, Thomas (Beth) Zandstra, Jacob Zandstra, Andrew Van Duyn, John Van Duyn, Joseph Van Duyn, Matthew Van Duyn, Caleb Vandenbroek, Samuel Vandenbroek, Simon Vandenbroek; great-granddaughter Delphine Zandstra, his in-laws: Susie Kravig, Tom (Mary) De Vries, Ken (Denise) Bootsma, and many extended family members. A funeral service with military honors will be held at 11:30 a.m. (Eastern Time), Saturday, February 26, 2022, at the Yntema Funeral Home, 251 S. State Street, Zeeland, Mich., 49464. Visitation will be 9:30–11:15 a.m. Saturday, prior to the funeral service. Interment will be in Zeeland Cemetery. Memorials may be made to Back to God Ministries International (ReFrame Ministries).

The family of David Lee Van Duyn created this Life Tributes page to make it easy to share your memories.