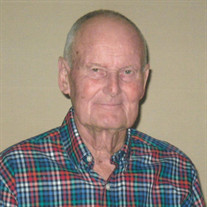 Del Arendsen completed his earthly race and went home to Heaven on Tuesday, May 3, 2022, at the age of 83. Del was born in Drenthe, MI and was raised in the farming community of Oakland. He was the third of five children born to John and Jessie (Louwsma) Arendsen. In addition to his parents, he was preceded in death by his brother and sister-in-law Lee and Donna Arendsen, sister and brother-in-law Ila and Glen Molter, and his son-in-law Woody Ballard. He is survived by his best friend and wife of 62 years, Muriel (Mert); his children: Michael and Krista Arendsen of Zeeland, and Barbara Ballard of New Baltimore, MI; his grandchildren and great grandchildren: Evan and Lia Arendsen (William, Emmaline and Oliver), Dan and Kelly Arendsen (Quinn, Luke, Asher and Eli), Izaac and Maddie Arendsen, Griffin Ballard and Sarah Loughman, Carly Ballard and Sheldon Hinkle; his brothers: Earl and Lou Arendsen and Gene and Marianne Arendsen; his sisters-in-law: Arlene Timmer, Pat Timmer and Esther and Mark Engel. Together Del and Mert were blessed to experience the Christian fellowship of Bethel Church in Zeeland for all their married life. Del spent his entire working career at Herman Miller Inc. retiring from Human Resources in 1998. In his early years Del much enjoyed a competitive game of fast pitch softball as well as some pretty serious bowling. Later he appreciated spending his leisure time on the golf course, something he and Mert enjoyed doing together, along with spending many winters in South Carolina and Florida. Del struggled with a muscle disease for the last 20 years of his life which limited his physical activities. He was honored to have been able to serve his country with the United Army in Germany from 1956-1958. Visitation will be 4-7 pm Tuesday, May 10, 2022, at Yntema Funeral Home, 251 South State Street, Zeeland. The funeral service will be 11 am Wednesday, May 11, 2022, at Bethel Christian Reformed Church, 515 East Main Street, Zeeland. Interment will be in West Drenthe Cemetery. Memorial contributions may be given to Zeeland Christian School, Rehoboth Christian School or Hospice of Holland. www.yntemafh.com

Del Arendsen completed his earthly race and went home to Heaven on Tuesday, May 3, 2022, at the age of 83. Del was born in Drenthe, MI and was raised in the farming community of Oakland. He was the third of five children born to John and Jessie... View Obituary & Service Information

The family of Del Arendsen created this Life Tributes page to make it easy to share your memories.

Send flowers to the Arendsen family.