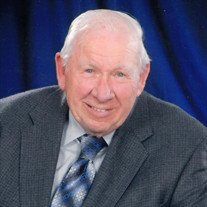 Delbert Hoffman, age 88 of Beaverdam passed into Glory Saturday, June 4, 2022. He is survived by his wife of 66 years, Janice; his children: Dan and Mary Hoffman and Deb and Mark Bussis; his daughter-in-law Michelle and Ken DeMann; his grandchildren: Ryan and Emily Bussis, Stephanie and Justin Kreuze, Sarah and Adam Bosma, Kyle and Laura Bussis, Joshua Bussis and his fiancé McKayla Puskarich, and Joseph Hoffman and his fiancé Shannon Veld and many great grandchildren; Del is also survived by his sisters: Isabelle Jeurink and Lucy Hoffman; and his sister-in-law and brothers-in-law: Walter (Butch) and Sharon Van Klombenberg, Eugene Walters and several nieces and nephews. Del was preceded in death by his son David Hoffman; his brothers-in-law and sisters-in-law: Ben Jeurink, Mary Walters, and Shirley and Alfred Hamming. Del was a man of integrity who loved his family, but above all else his Lord and Savior. For 42 years he hauled milk; later in his career he enjoyed spending weekends at his cottage on Silver Lake. He was a long-time member of Beaverdam Reformed Church where he served as Sunday School treasurer and elder. Later he was a member of Hudsonville Reformed Church where he enjoyed calling on the elderly and shut ins. Del was a hard-working man who was always willing to help people out. Del and Jan enjoyed collecting John Deere tractors and antiques; in his retirement they had a John Deere Museum and loved sharing it with whoever stopped by. Del’s family would like to thank the staff at Riley’s Grove Assisted Living Center for the excellent loving care he received. Visitation will be 5-7 pm Tuesday, June 7, 2022, at Yntema Funeral Home, 251 South State Street, Zeeland. The funeral service will be at Noon, June 8, 2022, at Hudsonville Reformed Church, 3950 Highland Drive, Hudsonville. The Reverends Scott Van Oostendorp and Tyler Wagenmaker will officiate. Interment will be in Beaverdam Cemetery. Memorial contributions may be given to the Billy Graham Evangelical Association, you can donate online at https://billygraham.org/give/give-online

Delbert Hoffman, age 88 of Beaverdam passed into Glory Saturday, June 4, 2022. He is survived by his wife of 66 years, Janice; his children: Dan and Mary Hoffman and Deb and Mark Bussis; his daughter-in-law Michelle and Ken DeMann; his grandchildren:... View Obituary & Service Information

The family of Delbert Hoffman created this Life Tributes page to make it easy to share your memories.

Send flowers to the Hoffman family.