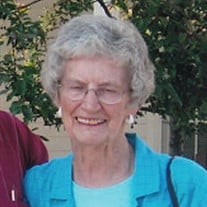 Delores “Dee” Wiedman, age 97, of Holland, passed away on Saturday, March 26, 2022 at the Freedom Village Inn. Dee was a strong woman. She was a great mother who was very involved in her daughters’ lives. She worked as a secretary at Quaker Industries in the Tray Tables and Shelving area, and it was there that she fell in love, after being widowed, with her second husband, Ken. Dee attended Central Wesleyan Church in Holland, and had many hobbies, which included, doing puzzles, dominating in Scrabble, and playing word games on her tablet. Dee was preceded in death by her first husband, Hans Joseph Gorlitz, in 1961; and her second husband, Kenneth Wiedman, in 2013. Dee came to Freedom Village from Kenosha, WI following Kenneth’s death. She is survived by her daughters: Susan & Robert Campbell, Patricia & David Longly; grandchildren: Mike & Barbara Campbell (Ian), Mitch & Emily Campbell, Matt & Sandra Campbell (Dan, Joe, Tom), Jaimie & Josh Cowen (Griffin, Sabine), and Brian & Jessie Longly (Zachary, Madison). A memorial service to honor Dee will be held at 2:30 p.m. on Saturday, April 2, 2022, at Langeland-Sterenberg Funeral Home, 315 E. 16th Street, Holland. A time of visitation (with light refreshments) will be held from 1:00 p.m. – 2: 30 p.m. prior to the service. Burial will take place in Southern Wisconsin Veteran Memorial Cemetery. Memorial contributions may be given to the Freedom Village Scholarship Fund or Spectrum Hospice. www.langelandsterenberg.com.

The family of Delores "Dee" Wiedman created this Life Tributes page to make it easy to share your memories.

Delores “Dee” Wiedman, age 97, of Holland, passed away on Saturday,...

Send flowers to the Wiedman family.