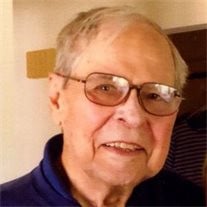 Donald Van Ry, age 93, of Holland, died on Friday, July 30, 2021 following a heroic 7 year battle with cancer. Donald was born to Lillian and Franklin Van Ry on June 12, 1928, in Chicago, IL. When he was 3 years old his family moved to Holland and Don attended Holland Schools and later graduated from Hope College in 1950. After graduation, he joined the Airborne Infantry Division. Following his service, Don met Marian Eastman, also a Hollander, and they were married in 1954. He taught school for a short time but later left for the business world. He retired in 1994 from Mazda Great Lakes of Grand Rapids, where he travelled 5 states as a Business Manager. Don was an avid golfer, playing the last several years mostly at Winding Creek and before that at the American Legion golf course. Don was a member of the American Legion all of his adult years. Don and Marian were members at Christ Memorial Church for many years. Don served as an elder, worked on many projects and sang in the choir. Don is survived by his wife of 67 years, Marian Van Ry; children: Sue and Mike Huey of Florida, James Van Ry of Douglas, and Laura Van Ry of Holland; step-grandson, Brandon (Chelsea) and their three sons; in-laws: Donna Dreyer, Betty and Robert Oisten, Michael Eastman, Lois Mitchell; as well as many nieces, nephews, and cousins. He was preceded in death by his brother, Robert Van Ry; in-laws: Jennie Oisten, Joyce Van Ry, Cheryl Eastman, Joseph Mitchell, John Dreyer, Tom Eastman, and Robert Eastman. A private graveside service will be on Wednesday at Pilgrim Home Cemetery. A Celebration of Don's Life will take place at a later date. Memorial contributions may be given to the Holland Rescue Mission. Arrangements are by Langeland-Sterenberg Funeral Home. Memories of Don will be greatly appreciated and can be shared online at www.langelandsterenberg.com.

Donald Van Ry, age 93, of Holland, died on Friday, July 30, 2021 following a heroic 7 year battle with cancer. Donald was born to Lillian and Franklin Van Ry on June 12, 1928, in Chicago, IL. When he was 3 years old his family moved to Holland... View Obituary & Service Information

The family of Donald Jay Van Ry created this Life Tributes page to make it easy to share your memories.

Send flowers to the Van family.