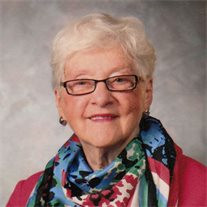 Evelyn June Rietberg (Huizenga) Evelyn Rietberg was reunited with her loved ones in the presence of God on August 6th following a lengthy, grace-filled struggle with cancer. As she was quick to note, she was proud to be "a Zeeland farm girl," one of seven children born to William and Alice Huizenga. She attended Zeeland and Holland Christian Schools and studied voice in high school with Norma Baughman of Hope College, developing a talent and passion that remained a constant throughout her life. She continued her vocal studies with James De Jonge at Calvin College, graduating in 1954 with an A.B. in vocal music education. At Calvin, she was active with the A Capella Choir, Band, Forensic Board, Musicians Guild, Oratorio, Yearbook, and Thespian Players; she took first place in the Peace Oratorical Contest and was on the Homecoming Court. After graduation, she taught music in the Christian schools in Passaic and Midland Park, New Jersey, studied voice with Eleanor McClellan in New York, and sang in the Montclair Choral Society. In 1955 she returned to Holland to teach in the Holland Christian Elementary Schools. She found her calling working with young children at Cherry Lane Nursery School and continued her 18-year career teaching preschool with Holland Christian Schools. She had a gift for celebrating the best in each child she taught and guided generations of children to see God in the world and to appreciate the beauty of words and music. Evelyn married Roger Rietberg in 1955 and had four children – Jon, Tommy, Robbi, and Amy. Tommy was in third grade at South Side Christian School when he died following surgery for a brain tumor in 1968. Her devotion to her children near and far away was her central focus always. Her 60-year marriage with Roger was founded on their deep love for each other and their shared passion for music. While Roger served as Minister of Music at Third Reformed Church in Holland, Evelyn sang in the Sanctuary Choir and directed the Junior Choristers and the St. Nicholas and Genevan Bell Ringers. She sang the role of the mother in Menotti's "Amahl, and the Night Visitors" twice and was a recognizable voice heard by many at church services, weddings, and funerals throughout the years. She remained involved with music long into her retirement, singing and soloing with the Evergreen Commons Chorale and directing the Evergreen Commons Bell Choir. She also gave generously of her time and energy to many church and community organizations, including Reformed Church Women, Guild, Circle, Wedgewood Acres, and Century Club. In addition to music, Evelyn loved spending time in her garden and spending time with her children, grandchildren (Becky Johnson Dykema and Katie Rietberg; Ryley, Sarah Kate, and Pieter Hartt; Maddie and Taylor Van Allsburg), and great grandchildren (Bella and Shane Dykema). She demonstrated her deep faith in God and her selfless devotion to others in all of her actions, leaving a lasting imprint on her family, church, and community. Friends are invited to meet with the family on Thursday evening from 6:30pm to 8:30pm at Third Reformed Church (111 West 13th Street, Holland). The memorial service will be held at 11:00 a.m. on Friday (also at Third) with a luncheon to follow in the Fellowship Hall. Memorial gifts may be given to Wedgewood Christian Services' Children's Hope Fund and Hospice of Holland. The family is being served by Langeland-Sterenberg Funeral Home. www.langelandsterenberg.com.

Evelyn June Rietberg (Huizenga) Evelyn Rietberg was reunited with her loved ones in the presence of God on August 6th following a lengthy, grace-filled struggle with cancer. As she was quick to note, she was proud to be "a Zeeland farm girl,"... View Obituary & Service Information

The family of Evelyn J. Rietberg created this Life Tributes page to make it easy to share your memories.

Send flowers to the Rietberg family.