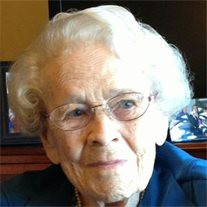 May 2, 1918 - November 13, 2013 Florence Edna Dougherty Bradford, age 95, of Holland, died Wednesday, November 13, 2013 at the Inn at Freedom Village. She was preceded in death by her first husband, Granville Dougherty, in 1986, second husband, Rev. Eugene Bradford, in 2010, and her brother John Miller. Born in Philadelphia, she lived there for 40 years prior to moving to southern California where she worked for Wycliffe Bible Translators for 30 years. From there she moved to Chapel Hill, NC, and continued to work for Wycliffe. In 1988 she moved to Holland and married Rev. Bradford. Florence is survived by her children, David and Sherry Dougherty, Gail Rutledge, Bruce and Susan Dougherty, Naomi and Joe Wheeler; 10 grandchildren; 8 great grandchildren; step-children, Thomas and Susan Bradford, Elizabeth and Robert Aupperlee, Linda Bradford and James Jenkins, Jonathan and Grace Bradford, David Bradford; 10 step-grandchildren; 16 step-great grandchildren; sisters Elsie Steele and Grace Dutton, and sister-in-law Mary Miller; step brother, William and Beatrice Bradford; many nieces and nephews. There will be a memorial service at 1:00 p.m. Sunday, November 24, 2013 in the Auditorium at Freedom Village, 145 Columbia Ave., Holland. Memorial contributions in lieu of flowers may be given to Pillar Church, 57 E 10th St., Holland, MI, 49423. The family is being served by Langeland-Sterenberg Funeral Home, 315 E. 16th St. Holland.

The family of Florence Edna Dougherty Bradford created this Life Tributes page to make it easy to share your memories.