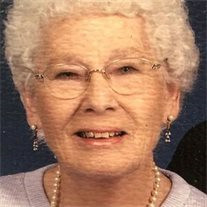 Genevieve E. Warner, nee Van Milligan, age 95, went to be with her Lord and Savior on Wednesday, June 2, 2021. She was the beloved wife of the late Virgil L. Warner and loving mother of Virginia (Rev. Stephen) Steenstra of Sun City, Arizona; Beverly (Paul) Neerhof of Brookfield, Wisconsin; Jack (Kim) Warner of Zeeland, Michigan; and Barry (Mary) Warner of Dyer, Indiana. She was blessed to be the grandmother of 17: Philip and Kate Steenstra, Joel and Leanne Steenstra, Rebecca and Chris Walls, Paula and Chris Naranjo, Carissa and Mike Hoium, Julie and Ron Thenn, Michael Neerhof, Chad and Kelly Warner, Kevin and Danielle Warner, Justin and Kristina Warner, Jayna and Will Streiff, Kara and Jordan Reitsma, Kristin and Jeff Griffoen, Rachel and Jared Van Baren, David Warner, Lauren and Ben Feenstra, Kelly and Nick Lubbers; and great-grandmother of 36. Genevieve was a dear sister to Peter, Katherine (Pruim), William, and Henry Van Milligan, all deceased. Genevieve was born in South Holland, Illinois to Henry and Henrietta Van Milligan on New Year's Day of 1926, and spent the first 70 years of her life there. While working at Whiting Corporation, she met Virgil Warner formerly of Pella, Iowa. They were married, and she dedicated her life to raising four children. Virgil and Genevieve were active members of the Bethany Christian Reformed Church and later the Protestant Reformed Church of South Holland. Genevieve loved church involvement, camping trips, sewing, and her part-time job of 20 years at the Back to God Hour. In 1996 Genevieve and Virgil moved to Zeeland, Michigan, where they were members of the First Protestant Reformed Church of Holland. They greatly enjoyed their times with the Golden-Agers of the Salvation Army, the Michigan Woodcarvers, and the Zeeland Historical Society. A funeral service will be held at 11:00 am, Monday, June 7, 2021, at First Protestant Reformed Church of Holland, 3614 104th Ave., Zeeland MI 49464. Visitation will be 10:00-10:45am prior to the funeral service at church. Interment will be in Zeeland Cemetery. Memorials may be made to Reframe Ministries or the Reformed Witness Hour. Arrangements by Yntema Funeral Home, 251 S. State Street, Zeeland MI 49464. www.yntemafh.com

Genevieve E. Warner, nee Van Milligan, age 95, went to be with her Lord and Savior on Wednesday, June 2, 2021. She was the beloved wife of the late Virgil L. Warner and loving mother of Virginia (Rev. Stephen) Steenstra of Sun City, Arizona;... View Obituary & Service Information

The family of Genevieve Warner created this Life Tributes page to make it easy to share your memories.

Send flowers to the Warner family.