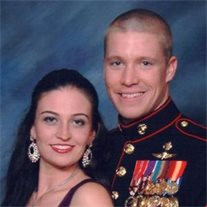 Gunnery Sergeant Daniel J. Price, age 27, of Holland, went to be with his Lord and Savior on Sunday, July 29th, 2012. Daniel was survived by his loving wife of 6 years, Rachel (Fox), his parents Karl and Ruth (Dykstra), his brother Nathan (Nicole) and their three children and his sister Rebecca (Matt Reyenga), mother-in-law Yvonne (Klomparens) Ankerman, and grandparents Neil and Joyce Dykstra, Shirley Price, as well as aunts, uncles and cousins. Dan was killed in action while conducting combat operations in Badghis province in Afghanistan in support of Operation Enduring Freedom. Dan was assigned to 1st Marine Special Operation Battalion, United States Marine Corps Forces Special Operations Command, based at Camp Pendleton California. Dan entered the Marine Corps in July of 2003. While at the School of Infantry, Camp Pendleton, California he checked into 1st Reconnaissance Battalion in Camp Pendleton and then was screened and selected to become a Reconnaissance Marine. Dan attended the Basic Reconnaissance Course in 2004. He attended several formal schools including Survival Evasion Resistance and Escape (SERE) in 2004, Combat Water Safety Swimmer in 2004, Special Operations Training Group Assault Climber (SOTG) in 2004, Army Airborne in 2004, USMC Combatant Diver in 2006, Scout Sniper in 2006, Multi Mission Parachute Course that qualified him as a HALO/HAHO advanced freefall jumper in 2010. Dan's deployments consisted of six combat tours to include three deployments to Iraq in support of Operation Iraqi Freedom, and three tours to Afghanistan to support Operation Enduring Freedom. During his combat service he was meritoriously promoted to Sergeant during a tour to Iraq. Due to Dan's exceptional performance he was selected to be a part of Marines Special Operations Command (MARSOC) in January of 2008. During his career his personal decorations included a Bronze Star with combat V for his heroic combat actions in Afghanistan, a Purple Heart as a result of a combat injury in Afghanistan in July of 2011, a Navy and Marine Achievement Medal, three Good Conduct Medals and three Combat Action Ribbons. Dan was an expert in pistol and rifle marksmanship. Dan was homeschooled and graduated in 2003. He worked on Seldom Rest Farm from the age of 11 until he left for boot camp. Dan and Rachel were married on July 1st 2006 in Holland, Michigan. Dan and Rachel lived in San Marcos California and were members of Escondido United Reformed Church in Escondido, California. Funeral services will be at 10am on Saturday, August 11th, 2012 in the worship center of Central Wesleyan Church, 446 West 40th Street, Holland, MI 49423 with Rev. Phil Vos officiating. Burial will be in Pilgrim Home Cemetery of Holland. Visitation will be at Langeland-Sterenberg Funeral home, 315 East 16th Street, Holland, MI 49423, on Wednesday, August 8th 2012 from 5-8pm, and Thursday, August 9th 2012 from 1-4pm and 6-9pm. A memorial service will be held in California at a later date. Memorial contributions may be given to the Wounded Warrior Project, P.O. Box 758517 Topeka, KS. 66675 www.woundedwarriorproject.org.

Gunnery Sergeant Daniel J. Price, age 27, of Holland, went to be with his Lord and Savior on Sunday, July 29th, 2012. Daniel was survived by his loving wife of 6 years, Rachel (Fox), his parents Karl and Ruth (Dykstra), his brother Nathan (Nicole)... View Obituary & Service Information

The family of Gunnery Sergeant Daniel J. Price created this Life Tributes page to make it easy to share your memories.