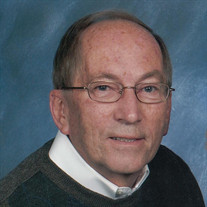 Herman Louis Kolk passed away on Saturday, April 16, 2022, and moved along to Heaven, where he’s sure to be found hanging out with the friends and family who preceded him. He was 87 years old and finally succumbed to cancer. Herm's service will be livestreamed, and can also be viewed later via this link: https://youtu.be/UpNrTYYddTA. He was born in Fremont, MI in the middle of the Great Depression and grew up on the family dairy farm east of town. He attended Fremont High School and Calvin College and excelled at sports (especially baseball) in both places. Herm met his wife of 65 years, Carol June, on a blind date in 1955. Carol was a Strabbing from Graafschap, a small village southwest of Holland. They were married on Valentine’s Day in 1957. The newlyweds moved to an apartment in Holland and in short order began expanding the family with the addition of Rick, Mike and Tim. In slightly longer order, they decided to expand again and along came Cheri. Softball, basketball, golf, and camping trips kept the family busy enough. But Herm was also a musician who sang. A lot. In the early days as a member of the quartet, the Fremonters, to the Magnachords, and multiple years in the male chorus, His Men. He was always in demand as a guest soloist at more churches in West Michigan than any of us can remember. As a result, Sunday practice afternoons at the Kolk household were a constant concert. We’re sure the neighbor’s loved it as much as we did. Herm was an accountant and business office manager when he wasn’t singing or taking vacations or playing sports. He started at Holland Diecasting on Lakewood Blvd in 1957 just one month before getting married. He spent nearly 30 years there in the automotive industry. Then in the mid-eighties he decided to go back to school. For the remainder of his career, he was the business manager at Holland Christian Schools, retiring from there in early 2000. The family were (and are) members of Maranatha Christian Reformed Church on Central and 37th St for over 60 years. Being an accountant, Herm was almost immediately drafted into multiple terms as a deacon and church bookkeeper. He also served as an elder. Along with all of that, he of course directed the church choir for over half of those 60 years. Family was extremely important to Herm. Friday lunch and Sunday tacos will not be the same without him. He adored his grandchildren and was passionate about attending their events. Whether it was baseball, football, tennis, dance, theatre, band, choir or anything else – he was their biggest fan. Herm is survived by his wife Carol; four children - Rick, Mike (Gwenn), Tim (Jennifer), and Cheri Quillan (Steve); grandchildren Elena, Nick, Daniel & Michael; Sam & Alex; Owen, Cara & Brooklyn; eight great grandchildren; and extended family: Dick (Pat) Flickema, Rose (Ross) Kieft, Judy (Tom) Russell, Ona Strabbing, Jo Strabbing, Norma Van Popering, and Roger Shoemaker. The family wishes to thank Beacon Hill at Eastgate, Resthaven, Hospice of Holland and the staff at Holland Hospital for their compassionate care over the last weeks of Herm’s life. A memorial service honoring Herm will take place at Noon on Thursday, April 28, 2022 at Maranatha Christian Reformed Church, 918 Central Avenue, Holland. A time of visitation will be held Wednesday, the evening prior, from 5:00 p.m. – 8:00 p.m. at Langeland-Sterenberg Funeral Home, 315 E. 16th St., Holland. An additional visiting period will occur an hour before the service at the church. Burial will take place at Graafschap Cemetery. Those wishing to make a memorial donation may consider Hospice of Holland, 270 Hoover Blvd, Holland, MI 49423, or the Beacon Hill Foundation, 1919 Boston St SE, Grand Rapids, MI 49506. www.langelandsterenberg.com.

Herman Louis Kolk passed away on Saturday, April 16, 2022, and moved along to Heaven, where he&#8217;s sure to be found hanging out with the friends and family who preceded him. He was 87 years old and finally succumbed to cancer. Herm's... View Obituary & Service Information

The family of Herman L. Kolk created this Life Tributes page to make it easy to share your memories.

Send flowers to the Kolk family.