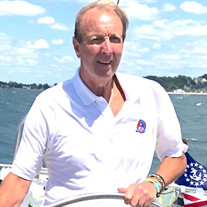 Jeffrey Paul Sale, 62, beloved husband, stepfather and grandfather passed away at his home in Grand Haven on June 6, 2022. Anyone lucky enough to have known Jeff, knew of his kindness, compassion, intelligence, adventurous spirit, and the way he loved with his whole being. This was especially evident in the 20 years he shared with his soulmate, the love of his life, Cindy Sale and his stepchildren, Jeffrey and Sonia Howard, Laura Martinez, Michael Benjamin Battaglia “Ben”, and grandchildren, Spencer, Haley, Alyssa, Michael, Vanessa, Ryan, Lillian, Natalie, Beckham, and Vivian: who were each blessed to have shared in his love and compassionate spirit. There was nothing that Jeff wouldn’t do to make Cindy, his children, and grandchildren happy. The family shared many special memories together on their sailboat, “Karma”. Which Jeff named because he so believed that the way we treat each other in life matters. This philosophy guided the way he treated everyone who crossed his path, with kindness and compassion. Jeff loved sailing. He often told Cindy that he was happiest on the water and there was no doubt of this truth. He started sailing at the young age of six on his little sailboat on Lake Macatawa. And he never stopped. He always told the story of his mom yelling at him to come to shore, which he would ignore until she threatened to take his boat away. That always got his attention, and he would head to shore immediately! Through his long sailing career Jeff achieved numerous trophies and awards. He sailed on the boat, “Pronto” with the owner, Joel Krissoff, and close friends, Mary and Charlie DeVries, out of Macatawa Bay Yacht Club for twenty years. During these years they earned numerous awards and trophies and Jeff became known as a legend in the sailing community and earned the respect of the most avid sailors. It was in his blood and nature. Sailing was in his soul; he intuitively knew the wind, waves, currents and how to make any boat "go fast". He sailed in 36 Chicago- Mac races, earning him the title of “Old Goat”. And even as recently as 2019, he entered the Leukemia Cup race at Macatawa Bay Yacht Club, with his own boat “Karma”, and sailed to a first-place victory (also receiving the Commodore's Cup) with his wife Cindy at his side. This was especially meaningful to Jeff as it was his own boat and his own skills that won the race. Jeff was often called by his nickname “sailboat’ or those that new him well would simply call him “Boat”. Sailing was a place of deep joy for Jeff. Born in Holland, Jeff graduated from Holland High School and attended Central Michigan University. Jeff spent all his life living near Lake Michigan. The Great Lakes were his source of peace, wonder, and excitement. He had a great respect for the Lakes, and as Captain, he felt a keen sense of responsibility for everyone aboard. Moving “inland” was never an option for this “old Goat”! In his early days Jeff was employed in the IT field. He wrote software programs and coding that he was especially proud of for 20 years at Whitmark before their closing in the late 90’s. He then moved to work at ISG, where he soon earned the admiration, respect and love of his co-workers. He was so good with people. He made everyone around him feel welcome and cared for and this was true in his work environment as well. Later in life started a car Dealership, Laker Motors, with his wife, Cindy and stepson, Ben. Jeff was an integral part of the success of the dealership and was loved and respected by the customers, employees, and vendors. Everyone who came into contact with Jeff knew he was a kind, caring, honest man. People couldn’t help but respect and like him. Jeff had a love and great knowledge of cars. If he could help it he never missed watching an F1 race: Go Ferrari! Along with F1, Indie racing was a love Jeff shared with his best friend, “Stork” Chris Krimendahl. At their last Indie race together, Jeff proudly phoned Cindy to share the fly over and start. He was always happy at “Indie”. Another passion they shared was grilling on a Weber Grill. They had a long-standing joke about the "Weber 9 million", which never failed to bring a smile and a laugh from Jeff when he talked about it. Jeff was preceded in death by his stepfather, Ted Nugent. He is survived by his soulmate, Cindy Sale, his stepchildren and 10 grandchildren. He is also survived by his mother, Donna Nugent, his father and stepmother, Paul and Bozena Sale, his brother and sister-in-law, Kurt and Amy Sale, and his half-sister, Tania and Ted Dozeman. He is also survived by four nephews, Tyler Sale, Travis Sale, Elliot Dozeman, and Sebastian Dozeman. And step siblings, Maggie and Brooke Elwood, Tom Nugent, Susie and Chuck Duquet, A Memorial Service will take place at 5:00 pm on Wednesday, June 15th, 2022, at Langeland, Sterenberg Funeral home 315 E. 16th St., Holland, MI 49423. A Scholarship Fund has been established in Jeff’s honor. Donations may be made to the Spring Lake Junior Sailing Association, P.O. Box 444, Spring Lake, MI 49456 or directly on their website at www.sljsa.org. Please include Jeff Sale Sailing Scholarship in the memo line of your check or select it on the website. Thank you. www.langelandsterenberg.com

Jeffrey Paul Sale, 62, beloved husband, stepfather and grandfather passed away at his home in Grand Haven on June 6, 2022. Anyone lucky enough to have known Jeff, knew of his kindness, compassion, intelligence, adventurous spirit, and the way... View Obituary & Service Information

The family of Jeffrey Paul Sale created this Life Tributes page to make it easy to share your memories.

Send flowers to the Sale family.