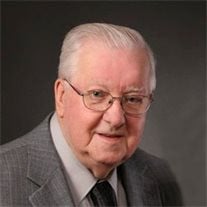 Hindrik Jan (John) Meier, age 90, of Holland, went to be with his Lord and Savior on Christmas Day, Dec. 25, 2021. John was a member of Central Avenue Christian Reformed Church, where he served as both a deacon and an elder. He loved the Lord and his faith was evident in all areas of his life. To view the livestream of the service, please visit https://youtu.be/sZZqCg9gAMc He was born on August 17, 1931 in Emlichheim, Germany to Egbert and Dina Meier. In 1956, he immigrated to the United States where he married the love of his life, Hermine Kolk on July 20, 1956, and God blessed them with 62 years together. She preceded him in death in 2018. As a young adult in Germany, John served an apprenticeship to become a baker. He put these skills to work at several bakeries in Holland: Banner Bakery, DuMond Bakery and then The French Pastry Shoppe, which he owned for 8 years with his wife. He finished his career baking for the food service at Hope College. After retiring, he converted a room in his basement into a home bakery, where he continued baking his trademark Krakelingen cookies and Dutch Banket for friends and family. John loved baking, but more than anything, he loved spending time with his family, playing Dutch Shuffleboard and other games. He is survived by his daughters, Bea Meier of Holland, Darlene and Jeff DeVries of Vriesland, Gladys and Dan Pell of Fremont; 6 grandchildren, Ben DeVries and fiancé Courtney Cox, Marina DeVries, Michael and Nicole Pell, Elizabeth and Tyler Herlien, Emilee Pell, Hannah Pell; and his great-grandson, Beckett Herlien. He is also survived by his siblings Johann and Heintien Meier, Dini Ekelhoff, Wilhelm Meier; his in-laws Gerrit Platje, Jan Hindrik Ekelhoff, Wilhelmina Meier, Tina Meier, Wilmine Meier, Anne Meier all of Germany; and many nieces and nephews. He was preceded in death by his parents, his sisters Gesien and Jantina, his brothers Gerrit Jan, Heinrich, Georg, Eduard, and Herman, and also Hermine's parents, her 8 brothers and one sister, and their spouses. Funeral services will be at 12:00 noon on Friday, January 7, 2022 at Central Avenue Christian Reformed Church, 259 Central Ave. Holland, with Rev. James Scholten officiating. Burial will be in Pilgrim Home Cemetery. Visitation will be from 10:00-11:30am prior to the service. The family is requiring that masks be worn for the visitation and the service. Memorial contributions may be given to World Renew— Disaster Response Services or The American Diabetes Association.

Hindrik Jan (John) Meier, age 90, of Holland, went to be with his Lord and Savior on Christmas Day, Dec. 25, 2021. John was a member of Central Avenue Christian Reformed Church, where he served as both a deacon and an elder. He loved the Lord... View Obituary & Service Information

The family of John Meier created this Life Tributes page to make it easy to share your memories.

Send flowers to the Meier family.