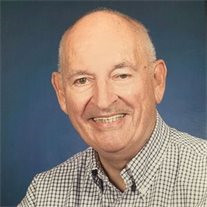 John Sexton Sr. age 95, of Holland, passed away on Thursday, June 17, 2021. John was born in New York City in 1925. His parents, John and Anna were immigrants, from Ireland and Germany respectively, and they raised John and his sister, Eileen, in NYC. John attended the city's public schools and shortly after graduating high school in 1943 he went into the Navy where he served his country honorably during World War 2. After the war, he attended the Polytechnic Institute of Brooklyn and received a bachelor's degree in Electrical Engineering. During the next 20 years her worked for a major engineering company on Long Island while attending Long Island University. He received his master's in business with honors and was elected to the Delta Mu Delta Honorary Society. Afterwards, he entered the New York University Graduate School of Business in pursuit of a Doctoral Degree but was unable to complete his studies because of his move to Holland, MI in 1973. John moved from NY to Holland to become President of Thermotron Corp, a small manufacturer of environmental test chambers located near Kollen Park. During his eight years as president, the company grew 12-fold and added a large manufacturing site on 32nd St. in Holland. With a change in ownership, he left and subsequently founded a competing firm, Sexton Industries in Zeeland. In 4 years, he built the company to 12 million in yearly sales, and in 1984 he was awarded the US Small Business Award for Excellence. Retiring after 10 years, he remained active and formed Sexton Corporation, an engineering consulting firm. John was elected a Fellow of the Institute of Environmental Sciences and Technology in 1961 and was elected to the New York Academy of Sciences the same year. He was a long-time senior member of the Instrumentation Society of America and was a member of the U.S. International Electrotechnical Commission. He was also included in several Who's Who: Finance and Industry, In the Mid-West, The World, Technology Today and Leaders in Electronics. He credits his successes to the philosophy of "The 3 Ps". "People, Product, Profit" in that order. All these activities took him worldwide and he flew well in excess of one million miles. John had a wonderful life surrounded by a wonderful and loving family. He is survived by his wife of 61 years, Elfriede Sexton; sons: John Jr. and wife Angela, James and wife Kathleen; daughter, Kimberly; grandchildren Emily and Nathan. He was preceded in death by his parents and his sister and will be buried by his mother and sister in the Gate of Heaven Cemetery, Valhalla Westchester County, NY. Funeral services will be at 11:00 AM on Friday, June 25, 2021 at St. Peter's Catholic Church in Douglas, MI where John was an active member. Visitation will be on from 6-8 PM on Thursday, June 24 at Langeland-Sterenberg Funeral Home, 315 E. 16th St. Holland, MI 49423. Memorial contributions may be given to St. Jude's Children's Hospital. www.langelandsterenberg.com

John Sexton Sr. age 95, of Holland, passed away on Thursday, June 17, 2021. John was born in New York City in 1925. His parents, John and Anna were immigrants, from Ireland and Germany respectively, and they raised John and his sister, Eileen,... View Obituary & Service Information

The family of John Sexton, Sr. created this Life Tributes page to make it easy to share your memories.

Send flowers to the Sexton, family.