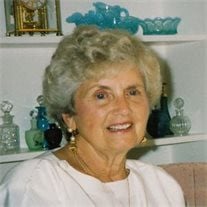 Katherine Lucille (Cassie) Genuit, age 96, of Holland, Michigan and formerly of Napoleon, Ohio was called home to be with her Lord and Savior on Thursday, February 3, 2022. Cassie was born in Fulton County, Ohio. She was the daughter of William and Wilma (Weber) Grime, one of a large Grime family. Her mother passed away early in her life. Foster parents were John and Helen Darby of Wauseon, Ohio. On August 15, 1948, she married the love of her life, Leon Frederick Genuit, her Navy sweetheart and greatest forever partner and friend. Cassie and Lee were active members of St. Paul Lutheran Church in Napoleon, Ohio where she was part of the Ladies Guild, and a member of the American Legion Auxiliary. She was employed by the Napoleon City Schools as a cashier for 15 years. Cassie loved spending time with her family and friends at home or at "the pond". She is preceded in death by her husband Leon; her granddaughter Megan; brothers: William, Robert, Clement, Langford, and James Grime; sisters: Angela Lauber, Marge Spoerle, Alice Davenport and Celestine Flanary. Cassie is survived by three daughters: Ann (Will) Edwards of Holland, Michigan, Jane (Gary) Van Langevelde of Holland, Michigan, and Linda (Dennis) Winrod of Westerville, Ohio; three grandchildren: Jeff (Shelby) Schuette of Nashville, Tennessee, Jennifer (Zach) Holland of Edmond, Oklahoma, Laura (Guy) Flom of Holland, Michigan; great-grandchildren: Hudson, Brecken and Lucca Holland; her faithful foster brother, John Darby of Mansfield, Ohio, and also foster sister, Diane Hinkle of Tavares, Florida. The family wants to thank those who attended Cassie at American House, also Pastor Dieter, and Hospice of Holland for their love and care. Memorial services will be held at Langeland-Sterenberg Funeral Home, 315 East 16th Street, Holland, Michigan, 49423, at 11:00 AM on Thursday, February 17, 2022. Visitation will be prior to the service from 9:30-10:45 AM. Pastor Dieter Haupt will officiate. Burial will be in the spring in Napoleon, Ohio. Memorial contributions may be given to St. Paul Lutheran Church, 1075 Glenwood Ave. Napoleon, Ohio, 43545 or Hospice of Holland, 270 Hoover Blvd. Holland MI 49423.

Katherine Lucille (Cassie) Genuit, age 96, of Holland, Michigan and formerly of Napoleon, Ohio was called home to be with her Lord and Savior on Thursday, February 3, 2022. Cassie was born in Fulton County, Ohio. She was the daughter of William... View Obituary & Service Information

The family of Katherine "Cassie" Genuit created this Life Tributes page to make it easy to share your memories.

Send flowers to the Genuit family.