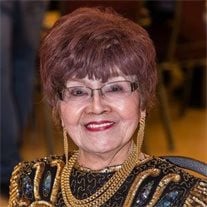 Lourdes "Lulu" Sanchez Justiniano, age 98, of Caledonia, passed away early Thursday morning, February 10, 2022 at home with loved ones at her side, after battling mild pneumonia. Lulu was born on August 16, 1923 in Zamboanga, Philippines. She was married to the late Dr. Guillermo Justiniano Jr., and had three children together. She was the second oldest and last surviving of five siblings: Domestinez Lalo Sanchez, Trinidad Seifert, Matilde Carte, and Consuelo Sanchez. Her parents, both deceased, were Santiago Duran Sanchez (Superintendent of Dapa School District) and Salud Bondoc Sanchez (Principal of Dapa High School). Lulu, as she was fondly called by her friends, was the last survivor from both her and her husband's sides of the family. The Matriarch of the family is gone. She came to the US in 1964 as a Registered Nurse in the Exchange Visitor Program. She worked for 5 years in Seattle and Chicago. She went back to the Philippines to sponsor her husband and 3 daughters. In 1974, all immigrated to the United States. She first graduated with a degree in Education and taught First Grade for a year before deciding that Nurse Midwifery was her real calling. She had delivered over a thousand babies as a midwife in the Philippines, mostly in the Southern regions of the country. She always attacked her career with vigor, persistence, and ambition. She went on to get her Master's in nursing from the University of the Philippines and became Assistant Professor of OB-GYN at Eastern Kentucky University from 1973 -1980. After retiring from nursing, she moved to River Grove, Illinois and went into several business ventures herself. She later left the busy Chicago life and lived with her daughter, Nora, from 2009 on. Lourdes always valued beauty and took much pride in how she looked and how she carried herself. She was involved in beauty pageants, both in the Philippines, and in Michigan. At 18 years old, she was voted Miss Teenage Queen in her hometown of Surigao, Philippines. In December of 2013, she won Mrs. Grandma Philippines in Grand Rapids, MI. She was preceded in death by her grandsons, Michael Anthony Nicolas and Stephen Jay Nicolas. She is survived by her children: Marilyn J. Nicolas, Nora J. Tan, and Cyd Justiniano (aka Ming Pai); 7 grandchildren: Stephanie Adams, Christopher Supernic (Hope Supernic), Theresa Tan, Alexander (formerly Kathryn) Nicolas, Rebecca Tan, Katherine Tan, Chitao Shih; 6 great-grandchildren: Jayda Adams, Keyana Adams, Aria Tan, Liv Adams, Melea Adams, and Marcario Josef Supernic. A Funeral Mass for Lourdes will be held at 11:00 a.m. Tuesday, February 15, 2022 at St. Francis de Sales Catholic Church, 171 West 13th St. Holland, MI. A time of visitation will be held prior from 10:00 a.m. – 11:00 a.m., also at the church. Burial will take place at Pilgrim Home Cemetery, and a lunch reception will be held after the burial at Anchorage Marina & Yacht Club, 1800 Ottawa Beach Road, Holland. Memorial contributions may be given to the family of Lourdes at 1791 Spring Meadow Court SE. Caledonia, MI 49316. www.langelandsterenberg.com.

Lourdes "Lulu" Sanchez Justiniano, age 98, of Caledonia, passed away early Thursday morning, February 10, 2022 at home with loved ones at her side, after battling mild pneumonia. Lulu was born on August 16, 1923 in Zamboanga, Philippines.... View Obituary & Service Information

The family of Lourdes "Lulu" Justiniano created this Life Tributes page to make it easy to share your memories.

Send flowers to the Justiniano family.