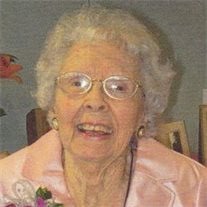 M. Marie Van Eerden, 100 years old, of Holland, passed away on Saturday, December 27, 2014. Marie was born November 2, 1914, in Holland, Michigan, to Benjamin and Eunice Dalman. She graduated from Holland High School, and later married the love of her life, John Van Eerden, in 1937. They raised their family in Holland and were members of Third Reformed Church. Marie was active in the Reformed Church Women's Ministries at Third Reformed and was a past president. For 23 years, Marie worked for Dr. Vern Boersma in his medical practice. Marie was a longtime fan of the Hope College Men's Basketball Team. She always listened intently to the radio broadcast if she couldn't attend in person. In 2005, after 67 years of marriage, her husband John preceded her in death. Marie is survived by her children: Sharon Bos of Holland, David and Jeanne Van Eerden of Onekama, Judi and Thomas J. Essenburg of Grand Rapids; 11 grandchildren, 19 great-grandchildren, her sister Evon and Robert Pluister, sisters-in-law Pauline Lanting, Hilma Van Eerden, and many nieces and nephews. A funeral service to honor the faith and life of Marie Van Eerden will be held at 2:00 pm, Monday, January 5, 2014, at Third Reformed Church of Holland, 111 W. 13th Street, Holland 49423. Visitation will be 4-6 pm, Sunday, January 4, at the Langeland-Sterenberg Funeral Home, 315 E. 16th Street, Holland 49423. Burial in Pilgrim Home Cemetery. Memorial contributions to Third Reformed Church Women's Ministries, or Resthaven. www.langelandsterenberg.com

The family of M. Marie Van Eerden created this Life Tributes page to make it easy to share your memories.