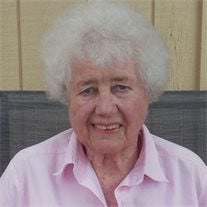 Marion Hazel Van Slooten, age 97, of West Olive, Michigan went to be with her Lord and Savior on Friday, February 4, 2022. Hazel was born August 25, 1924 to Ed and Sena Helder. She married Benjamin Van Slooten, and they were married 56 years before his death in 2009. Hazel is survived by her children; Benjamin III, and Ruth & Mark Howard; grandchildren and great grandchildren: Scott & Kaitlin Howard (Austin Van Dam and Harper) and Kaleigh Howard. She is also survived by siblings; Harvey & Donna Helder and Carolyn & Mike Vander Ploeg; and many nieces and nephews. Hazel was preceded in death by her parents and sisters; Alma Boeve, Gladys Dykhuis, Beatrice Boeve, Evelyn Lenters and Joanne Van Slooten. Hazel and her seven close-knit siblings grew up on their farm in East Holland. The mix of seven girls and one son meant the girls took on many chores usually done by guys. The Great Depression and World War II instilled values of faith, family, hard work, caring for others, thrift and a focus on what really matters in life. Hazel worked as a seamstress at a factory making clothes and World War II uniforms and at Chris Craft before becoming a full- time homemaker. Her sewing skills were put to good use throughout her life creating beautiful clothes and items for the home. Hazel loved music, swimming, walking, fall color tours and exploring God's creation, especially the shores of Lake Michigan with its magnificent sunsets. Her life revolved around faith, family and friends. She will be missed by many. If you were fortunate to be served one of her famous pies, you were fortunate indeed! Hazel's family would like to thank her First Reformed Church Zeeland family, as well as the care in her final years provided by Resthaven Maplewood Cottages, Holland Hospice and Faith Hospice. A funeral service honoring Hazel will be held at Noon on Tuesday, February 8, 2022 at First Reformed Church in Zeeland; 125 E. Lincoln Ave. A time of visitation will be held prior from 10:30 a.m. – 11:30 a.m., also at the church. Memorial contributions may be given to Camp Geneva. www.yntemafh.com.

Marion Hazel Van Slooten, age 97, of West Olive, Michigan went to be with her Lord and Savior on Friday, February 4, 2022. Hazel was born August 25, 1924 to Ed and Sena Helder. She married Benjamin Van Slooten, and they were married 56 years... View Obituary & Service Information

The family of Marion Hazel Van Slooten created this Life Tributes page to make it easy to share your memories.