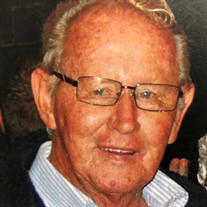 Robert “Bob” Heyboer, 87, of Zeeland, was invited into glory by his Lord on February 13, 2022, after a 6-month battle with cancer. Robert is survived by Gladys, his wife of 64 years; children Gayle (Ken) Morse, Brenda (Mike) Beyer, Gregory (Debbie) Heyboer, Kimberly (Rick) Vos, Jeffrey (Karen) Heyboer. Bob and Gladys were blessed with 22 grandchildren, 9 great-grandchildren, and 2 great-great-grandchildren plus one expecting. Bob is also survived by his brother Preston (Alma) Heyboer, sister Donna Canales, and brothers-in-law Harold, Marvin, and Calvin Sall. Bob was born May 9, 1934, in Holland Township, to Matthew & Emma (Bystra) Heyboer. Bob was passionate for his faith in God and was a long-time member and elder of Noordeloos Christian Reformed Church. As a husband and father, he worked hard to provide for his family both as an employee and small business owner. His various employments included being a janitor at Grand Valley State College and Zeeland Christian School. He and his family owned and operated Country Corners Ice Cream in Beaverdam as well as Preferred Carpet Service. Bob was a Korean War Era veteran of the U.S. Army. Bob and Glady loved spending winters in Bradenton, Florida, and served on the board of the Bradenton Chapel. The family requests memorial contributions be made to Zeeland Christian School or Hospice of Holland. Visitation will be 4-7 pm, Wednesday, Feb 16, at the Yntema Funeral Home, 251 S. State Street, Zeeland MI 49464. A funeral service will be held at 12 noon, Thursday, February 17, 2022, at Noordeloos Christian Reformed Church, 4055 112th Ave., Holland MI 49424. Interment will be in Noordeloos Cemetery. www.yntemafh.com

The family of Robert "Bob" Heyboer created this Life Tributes page to make it easy to share your memories.

Send flowers to the Heyboer family.