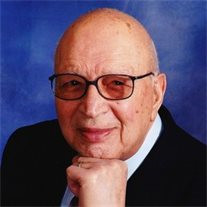 Robert Constantine (Bob) Botsis passed away peacefully at his home on February 4, 2022 at the age of 98. Bob was born in Holland, MI to Greek immigrants, Constantine Robert (Gus) and Vasiliki (Bessie) Botsis. His mother passed away when he was 14 years old. They were a tight-knit family. Bob's sister Anna helped their father raise her three brothers after their mother's death. Bob loved his family's adopted country and proudly served as a Sargeant in the Army Air Force in WWII in China, Burma, and India. Bob's brothers Peter and Nick also served during the war: Peter in the Army Air Force in England, and Nick in the Army Infantry in Germany. At the young age of 18, Nick went Missing in Action in Sandau, Germany on April 26, 1945 just a few days before the war ended. Bob and his siblings never forgot their brother's sacrifice and bravery and honored his memory throughout their lifetimes. After the war, Bob owned and ran the Colonial Sweet Shop in downtown Holland. His father Gus was the original proprietor of the candy store and soda bar where they made the candy by hand in large copper kettles. Later Bob owned the Office Tavern on River Avenue. Many of his customers became valued lifelong friends. Bob was a much beloved man of faith and devotion who loved the Lord and adored his family. He was preceded in death by his cherished wife Joan (Van Dyke) Botsis in 2005, after 52 years of marriage. He is survived by his children: Constantine Robert (Debra) Botsis, Nicholas (Kathleen Joy) Botsis, and Beth Ann Botsis; grandchildren: Robert Constantine Botsis, Aline Elizabeth Botsis, Brian Lewis Botsis, and Jenna Marie (Bryan Stuba) Kraft; in-laws: Amelia Botsis, Roger Van Dyke, and Marge Van Dyke; as well as many nieces and nephews and great-nieces/nephews who all treasured him. He was preceded in death by his sister, brothers and several in-laws: Anna (George) Varveris, Peter Botsis, Nick Botsis, Alvin Van Dyke, Alice (Bernard) DeWys, Lorraine (Frank) Wicks, Marian Kortman, Kenneth Van Dyke, Lois Plaggemars, and Pauline (Paul) Jousma. Bob was a member of Holy Trinity Greek Orthodox Church in Grand Rapids, MI for most of his lifetime. He will be remembered as a humble man with a gentle spirit, keen sense of humor, and generous heart. He taught his children by example about what it means to love God and be unconditionally loving, charitable, and faithful. Throughout his life he took care of many in their times of need, including his father, in-laws, many extended family members, neighbors, friends, and through other charitable acts. "His lord said to him, 'Well done, good and faithful servant: you have been faithful over a few things, I will make you ruler over many things. Enter into the joy of your lord." Matthew 25:23 Funeral services will be at 10:00 AM on Saturday, February 12, 2022, at Holy Trinity Greek Orthodox Church, 330 Lakeside Dr. NE, Grand Rapids, MI 49503. A luncheon will follow in the fellowship hall. Departure for the graveside ceremony at Graafschaap Cemetery at the SW corner of West 32nd Street and Graafschaap Road in Holland, MI after the luncheon. Visitation with the family will be from 3-7 PM on Friday, February 11, at Langeland-Sterenberg Funeral Home, 315 East 16th St. Holland, MI 49423. Additionally, there will be a viewing at church on Saturday from 9:00-9:45 AM. Memorial contributions may be given to Holy Trinity Greek Orthodox Church.

Robert Constantine (Bob) Botsis passed away peacefully at his home on February 4, 2022 at the age of 98. Bob was born in Holland, MI to Greek immigrants, Constantine Robert (Gus) and Vasiliki (Bessie) Botsis. His mother passed away when he... View Obituary & Service Information

The family of Robert Constantine Botsis created this Life Tributes page to make it easy to share your memories.

Robert Constantine (Bob) Botsis passed away peacefully at his...

Send flowers to the Botsis family.