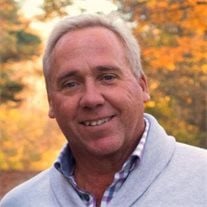 Robert "Bob" Jay Geurink, age 55, was welcomed into his heavenly home unexpectedly on Tuesday, November 1, 2016. Born and raised in Holland, Bob graduated from Hamilton High School where he met the love of his life, Anne Brower whom he was married to for 33 years. For years Bob and Anne were active members of Faith Christian Center and raised their four children, Andrew, Aaron, Aric and Aimee to be followers in the faith. Currently, they attend Central Wesleyan Church. Bob was always a business man. He formerly owned and operated Bussies Truck and Auto and then, with his late father, Arthur Geurink, started A&B Farms. As current owner and operator of HES/A&B Farms, Bob ran the growing business with his three sons. Outside of work, Bob enjoyed wrenching and tinkering on equipment, dune buggies and trucks with his boys. He was a gearhead; he loved a fast car, a powerful engine and anything loud. He and Anne made frequent trucking trips to Florida for the business. On summer weekends they enjoyed relaxing up in the dunes at Silver Lake and spending time with their family. Bob was very involved in local 4-H where he encouraged and supported 4-H kids in their projects. Bob shared his passion with his daughter Aimee who raised, showed and sold livestock as well. Bob valued relationships and family and was an avid supporter of Winning at Home. He had a big heart for many local organizations including Wings of Mercy, where he previously served on the board. Bob is survived by his loving wife Anne; children and grandchildren, Andrew, Evie (Slagh) and Mason Geurink; Aaron, Kristen (De Young), Harvey and Axel Geurink; Aric, Dana (Jongekrijg) and Carson Geurink; Aimee Geurink all of Holland. Mother, Theresa Geurink of Holland; siblings, David and Lucy Geurink of Holland, Sandy and Joe Stasnek of Arizona, Dan and Jodi Geurink of Hamilton, Janet and Mike Brown of Hamilton, Jeff and Laura Geurink of Holland; Mother-in-law, Marianne Brower of Holland, Bill and Kim Brower of Zeeland, Sue and Craig Brown of Arkansas, Sarah and Tony Wagner of Rhode Island, Bobby and Beth Brower of Holland; several nieces, nephews, aunts, uncles and cousins. He was preceded in death by his father, Arthur Geurink and father-in-law, Harvey Jay Brower. A funeral service to honor the faith and life of Bob will be held at 10 a.m., Saturday, November 5, 2016 at Central Wesleyan Church, 446 W. 40th St. Holland, with Rev. Dan Seaborn officiating. Visitation will be 12-2 p.m. and 5-8 p.m., Friday, November 4 at Central Wesleyan Church (use main sanctuary entrance). Burial will be in East Saugatuck Cemetery. Memorial contributions may be given to Winning at Home or Wings of Mercy. The family is being served by Langeland-Sterenberg Funeral Home. To leave a condolence for the family, please visit www.langelandsterenberg.com.

Robert "Bob" Jay Geurink, age 55, was welcomed into his heavenly home unexpectedly on Tuesday, November 1, 2016. Born and raised in Holland, Bob graduated from Hamilton High School where he met the love of his life, Anne Brower whom he was married... View Obituary & Service Information

The family of Robert "Bob" Geurink created this Life Tributes page to make it easy to share your memories.

Robert &quot;Bob&quot; Jay Geurink, age 55, was welcomed into his heavenly...

Send flowers to the Geurink family.