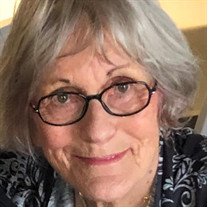 Ruth Jarvis, mother, grandmother, great grandmother, sister, aunt, friend, and lifelong Holland resident died Monday, May 9, 2022, following a brief battle with cancer. She was 81. Ruth graduated from Holland High School and soon after began raising a family, returned to Holland Public Schools where she worked with students in special education classrooms for 25 years. While in the twilight of her work there, she began a second career with the medical records staff at Holland Hospital for 25 years. Through her work, her relationships, and her family she cherished people. Her faith in Jesus was centering in her life and inspired her value for people that helped her see beyond what most see. She was actively involved in a Bible Study with her longtime friends at Third Reformed Church and was attending All Shores Wesleyan Church in Spring Lake. Her greatest joys were spending time with her family and making them laugh with her remarkable sense of humor, and she took in every moment and story from their lives. She was the keeper of family stories and often called on others to retell them. Her family adored her and all who knew her, and there were many, mourn her passing. She was preceded in death by her mother and father, Marjorie and William Van Howe; her former husband, Robert Jarvis; and a daughter, Kristi; and a granddaughter, Olivia Scholma. Ruth is survived by two daughters, Jayne (Peter) Yoshonis of Spring Lake; Susie Scholma of Holland; a son, Jason Jarvis of Holland; four brothers, Tom (Kristi) Van Howe, of Saugatuck; Mort (Fran) Van Howe, of Glenn; David (Barbara) Van Howe, of Indianapolis; and Peter (Jennifer Jacobusse) Van Howe, of Holland; eight grandchildren, five great grandchildren, and seven nieces and nephews. Visitation with the family is 4:00-6:00 pm on Sunday, May 15, 2022, at Langeland Sterenberg Funeral Home, 315 E. 16th St. Holland, MI 49423. Memorial services at 10:00 am on Monday, May 16, also at Langeland Sterenberg Funeral Home. Burial to take place in a private ceremony at Pilgrim Home cemetery. Memorial Contributions may be given in honor of Ruth to Chester A Ray Treatment Center, 231 Washington Blvd, Holland, MI 49423 www.langelandsterenberg.com

The family of Ruth L. Jarvis created this Life Tributes page to make it easy to share your memories.

Send flowers to the Jarvis family.