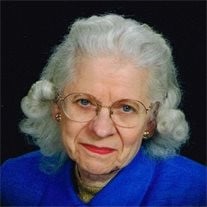 Shirley Porter, age 90, of Holland, passed away Friday, December 5, 2014 at Resthaven Care Center in Holland, MI following a ten year battle with Alzheimer's Disease. Shirley was born on September 11, 1924 in Lansing, MI to Peter and Rena Hamelink. She was the valedictorian of Lansing Central High School in 1942 and graduated from Michigan State University in 1946 with high honor as a Kappa Alpha Theta. Shirley married her childhood sweetheart, Fred, in 1946 and they briefly lived in the St. Louis area before settling in Lombard, IL, where they raised their family. In 1982 they moved to Holland, MI and spent the rest of their lives there. She was inquisitive, open-minded, and civically and politically active. She was especially passionate about the League of Women Voters and was a past President of the Lombard LWV. Shirley was the Lombard Service League's "Woman of the Year" in 1973, and in 1976 received a Certificate of Merit for meritorious service in the field of human relations from the Village of Lombard. She was also a school board member in District 87. In Michigan, she received the Florence Belle Brotherton Award from the LWV of the Holland Area in 2003. The Fred and Shirley Porter Award is an annual award made by the LWV-HA to individuals who symbolize the League's mission and who exemplify civic leadership. She received Lifetime Membership awards from the local and national LWV in 2008 for 50 years of service. Shirley was a member of the First Church of Lombard and the First Congregational Church of Saugatuck, MI. Shirley was preceded in death by her husband of 60 years, Fred Thomas Porter, in 2006; her parents, and her brother, Richard. Shirley is survived by her: Children Patricia and Henry Walczak of Holland Lawrence and Gloria Porter of Holland David and Pamela Porter of Villa Park, IL Grandson Douglas Porter of Chicago, IL Brother William and Betty Hamelink of Bloomington, MN A time of visitation is planned for 2-5pm Saturday, December 13 at Langeland-Sterenberg Funeral Home, 315 E 16th St., Holland. Memorial contributions may be made to the League of Women Voters of the Holland Area, PO Box 3183, Holland, MI 49422-3193 or Resthaven Care Center, 280 W 40th St., Holland 49423.

The family of Shirley Porter created this Life Tributes page to make it easy to share your memories.

Send flowers to the Porter family.