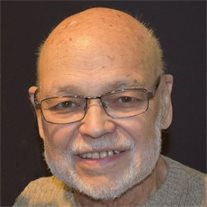 Tom Urbaniak, age 80, passed away Friday, January 28, 2022 at his home in Holland. He is survived by his wife of 52 years, Christine; daughter, Kelly, of Grand Rapids; son, Bradley and (Jennifer) of Orlando, Florida; grandchildren: Colbie, Gretchen, and Dash; sister, MaryAnn Conner and (Ed Cardonick); nieces, Joanne Conner and (Ramel Toledo), Laurie Conner and (Scott Geyer); and grand nephews, Alex and Liam. Tom was born in Detroit, Michigan. After high school, Tom attended the University of Michigan, but left school after his father's death and enlisted in the Marines for a 3-year duty. That gave him the time to decide what he wanted to do with his life. He returned to the Detroit area and earned a B.S. degree in psychology from Wayne State University. He worked long hours in the summer at Ford Motor Company to help pay for his education. He then moved to East Lansing to attend Michigan State University, and worked there as a graduate assistant while earning his MBA, and it is also where he met his future wife, Chris VanStatt. They married within the year and started their adventure together by moving to the San Francisco, California area on May 1, 1970 with a new car and their wedding gifts. Tom took a position at Bell Telephone as manager of a directory assistance office and then Hewlett Packard in human resources. Their family grew, and they realized they wanted to be near family back in Michigan. So, they packed up their two children, two cars, a full moving van, and headed back to arrive May 1, 1978 (exactly 8 years from the start of their adventure). Tom continued his career in human resources with Herman Miller, S2 Yachts and ended it with 21 years at Haworth. But Tom was much more than his career. He was always heavily involved in the community. He took the Leadership Holland training as an introduction to involvement options. He was a Mediator for Mediation Services for several years. They joined First Presbyterian Church, where he lead many financial and building campaigns, served as an Elder and on the Personnel Council and Outreach Council as the liaison for Out On The Lakeshore. He was passionate about recycling and began a program so the church could be a gathering point for light bulbs, batteries, Styrofoam, and a one-time collection where the community could bring electronics to recycle, and a semi-truck was filled. Tom was a confident speaker. He led Toastmasters, was often the emcee at Haworth retirement parties, and joined Holland Community Theatre where he performed in 22 plays in 21 years. He acted in musicals and dramas, but his great love was comedy. After deciding he was tired of memorizing scripts, he opted to join ReActors at Evergreen Commons where he could perform with a group of like-minded seniors and still enjoy the thrill of being on stage, even writing some of their skits. Tom's witty demeanor kept friends and family entertained, and his story telling was always interesting. He wrote stories for the HASP Review. He loved the arts: theater, music, museums, and galleries. He loved history and read avidly. They loved to travel, especially with friends, and were able to explore Greece, France, Germany, Mexico, China, Ireland and other countries. His memorial service will be held at the Outdoor Discovery Center at 1:00 p.m. on Saturday, June 4, 2022. There is some seating available, but feel free to bring a lawn chair. Donations can be made in Tom's name to the Memorial Fund at First Presbyterian Church, 659 State Street, Holland MI 49423 and to Out On The Lakeshore, 451 Columbia Ave., Holland MI 49423. www.langelandsterenberg.com.

Tom Urbaniak, age 80, passed away Friday, January 28, 2022 at his home in Holland. He is survived by his wife of 52 years, Christine; daughter, Kelly, of Grand Rapids; son, Bradley and (Jennifer) of Orlando, Florida; grandchildren: Colbie, Gretchen,... View Obituary & Service Information

The family of Thomas "Tom" Urbaniak created this Life Tributes page to make it easy to share your memories.

Send flowers to the Urbaniak family.