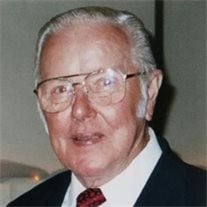 October 19, 1928 - October 25, 2013 Warren "Bud" Dusseljee, age 85, of Holland, passed away, Friday, October 25, 2013 at the Hospice House of Holland with his family at his side. Bud was born on October 19, 1928 in Grand Rapids, Michigan. He was the only child of the late Rev. Aldrich and Jessie Dusseljee. As a PK (preacher's kid) he lived in many different states, finally settling in West Michigan. He served in the United States Army during the Korean War as a Military Police Officer stationed in Germany. After his tour of duty, he returned to Holland to start his family with his bride, Lois Gertrude Bode. He was best known in the Holland area for his love of cars, working as a used car salesman and manager. He was also a long time member at Montello Park CRC. Bud enjoyed spending time with his family. Family vacations often revolved around camping, fishing, and water skiing. Bud was an avid water skier and excellent fisherman. Bud passed on the joy of these activities to his children. In his retirement years, Bud and his wife were "snowbirds", heading south in their RV every winter. If Bud was at home, you would likely find him in one of three places. He enjoyed working on his yard, tinkering with a project in his garage, or enjoying a cup of coffee with his friends at a local restaurant. Survivors include his loving wife of sixty-two years, Lois; his children, Richard (Pam) Dusseljee of Zeeland, Karen (Darc) Klomparens of Hamilton, Mary (Dan) DePree of Holland, Lori (Jonathan) Vugteveen of Allegan; grandchildren (who knew him as Opa), Reka (Brock) Lowther of West Virginia, Chris Dusseljee of Richland, Rhonda (James) Addessi of Holland, Traci (Will) Lacy of Florida, Chris (April) Klomparens of Holland, Sara Klomparens of Zeeland, Kevin DePree of Grand Haven, Steven DePree of Holland, Andrew DePree of Holland, Kassandra Vugteveen of Grand Rapids, John Vugteveen of Grand Rapids; 5 great grandchildren; in-laws, Bob (Mona Jean) Bode of Grand Rapids, Betty Bayless of Cadillac, Bill Sneller of Grand Rapids, Jean (Alden) Sneller of Zeeland; and several nieces and nephews. Funeral services will be 11:00am Tuesday, October 29 at Langeland-Sterenberg Funeral Home, 315 E 16th St., Holland. Rev. Arthur Van Wyhe will officiate. Burial will be in Pilgrim Home Cemetery. Visiting hours are scheduled for 6-8pm Monday and 10-10:45am Tuesday also at the funeral home. In lieu of flowers, donations may be made to "Blessing to Share" of Montello Park Church, 609 W. 20th St. Holland MI, 49423 or the Alzheimer's Association.

The family of Mr. Warren "Bud" Dusseljee created this Life Tributes page to make it easy to share your memories.

Send flowers to the Dusseljee family.