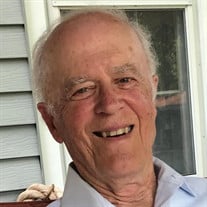 Funeral service livestream can be viewed here: https://m.youtube.com/channel/UCsNOS-ieaaF4kiObyRSbnqQ/live The Rev. Dr. William Clarence Brownson, Jr. entered peacefully into the presence of Jesus on April 1, 2022 in Holland, Michigan. Bill was born on June 27, 1928 in Charlotte, NC to William Clarence Brownson, Sr. and Juanita Clements Brownson. He received his A.B. from Davidson College, NC, his B.D. from Columbia Seminary, GA, and a doctorate in New Testament from Princeton Theological Seminary, NJ. Bill then served as pastor in two Reformed Church in America congregations, the first in Lodi, NJ, the second in Roseland, IL. Bill and Helen moved to Holland, MI with their family in 1964 where Bill became Professor of Preaching at Western Theological Seminary. After seven happy years there, he became the radio preacher for Words of Hope in Grand Rapids, MI, where he finished his long and fruitful ministry in 1994. Bill’s passion in life was sharing the good news of Jesus to all he met and to the world. He and Helen made several trips to countries where Words of Hope was broadcast, and experienced great joy in meeting other Christians and sharing the Gospel. Bill and Helen were active members of Christ Memorial Church in Holland. Bill authored many books, including The Plan Is God’s (1964), Tried by Fire (1972), Distinctive Lessons from Luke (1974), and Do You Believe? (1975). He and Helen wrote Billy and Dave: From Brokenness to Blessedness (2006) after the death of their son, David. In his retirement years, Bill frequently preached in churches in the area, and led Bible studies and prayer groups at Freedom Village in Holland, where he and Helen spent more than 20 years until their deaths. Bill was devoted to his wife, children, and grandchildren, a cheerleader of all their endeavors. He extended this love and interest to everyone he met, asking about their lives, families, and of course if they knew and loved Jesus. He often offered to pray with and for them, and enjoyed hearing about how God answered those prayers. Dr. Brownson was preceded in death by his sons Billy, who died in 1977, and David, who died in 2003, his dear wife, Helen Stewart Brownson, who died in 2015, and sister Jean Vivian Brownson Ribble. Bill is survived by his sons James Brownson (Kathryn Mostrom Brownson) and Jonathan Brownson (Jeannette Shafer Brownson), grandchildren, Rachel Brownson Brazier (LJ Brazier), Anna Brownson Prinz (Mark Prinz), Benjamin Brownson, Joanna Brownson Humphries (Elizabeth Brownson Humphries), William Brownson (Michael Hairston Brownson), Samuel Brownson (Rozina Kidari), two great-grandchildren, Wren Brownson Prinz and Baby Kieren, and sister-in-law Florence Stewart Brown. He will also be dearly missed by special friend, Jayne VerLee. The funeral will be held on May 16, 2022 at 11:00 A.M. at Christ Memorial Church in Holland, 595 Graafschap Rd. Visitation with the family will be on May 15, from 5:00 to 7:00 P.M. at the Langeland-Sterenberg Funeral Home, 315 E. 16th St., Holland, and before the service at Christ Memorial Church, from 9:30 to 10:30 A.M. A luncheon will follow. . After local services are complete, burial will be in the Alamo Memorial Cemetery in Alamo, GA. Donations in William’s honor may be made to Words of Hope, Western Theological Seminary, or Christ Memorial Church. Condolences may be left online at www.langelandsterenberg.com.

The family of Dr. William C. Brownson created this Life Tributes page to make it easy to share your memories.

Send flowers to the Brownson family.